One of the greatest lessons that I have learned as a parent, each child is unique in not only who they are but how they learn. With the kids starting school this week I thought I would share a bit of our journey into homeschooling.

When my oldest was in second grade we went through a very rough year. I’m sure many parent’s know the struggles of a doctor telling you, “Your child has  ADD” or some other difficulty. For us, the classroom became like a battlefield, the teacher and student at odds and I the parent became thee go-between. After many tear filled nights, not only my child’s, but mine. Donating lots of my time to aiding in the classroom. Finally, biting the proverbial bullet, a last ditch effort and trying medications (which ultimately was not successful). I decided that this year was it, I was homeschooling my kids the following fall!

Here we are, six years later. I would be lying if I told you that it has always been easy. There certainly have been moments of shear panic and “What did I get myself into?” type verbiage. But, the pay-off is worth it all. The first year in, my oldest was off all medication and thriving in thee environment we created. Learning is paramount, yes, but allowing him the out of the box experiences has been priceless! The one-on-one style I could provide, allowed him flourish! So many changes to allow my kid to be a kid again, to have fun.

Our schools have come SO far from the way I believe learning was intended. We now have massive amounts of students in a classroom with one teacher, spending seven hours (plus homework) in studies with very little activity during the day! Not only this, we expect each child to learn the same way and at the same pace. There is little room for the creativity and imagination that allow a child to thrive in a verity of ways. Students that are active, ahead or behind their peers, or lack thee ability to fit in the tiny box created by the school system- these are labeled, medicated or made to feel less than worthy! 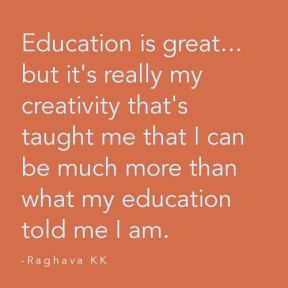 So where does creativity and imagination come into the picture? It’s allowing for day dreams, going outside to learn in nature, moving when necessary, it is taking a break to do “kid stuff” and the list goes on. It is the mind-set that each child is unique and that even daily the way they learn can change. This frame of mind is hard for adults, we have been taught to rely on a system. One that we went through and generations before us. But, when freed from this belief, it opened up a whole new world to me too!

If this helps even one family on the fence about the benefits of teaching from home then I am thrilled. And, if it encourages multiple families to keep on the path, don’t give up and encourage creativity- I have truly succeeded! Please, feel free to contact me with questions regarding homeschooling, I would love to help you accomplish greatness!