Up Always, Back Never

“When you look at a piece of delicately spun glass you think of two things: how beautiful it is and how easily it can be broken.” ~Tennessee Williams 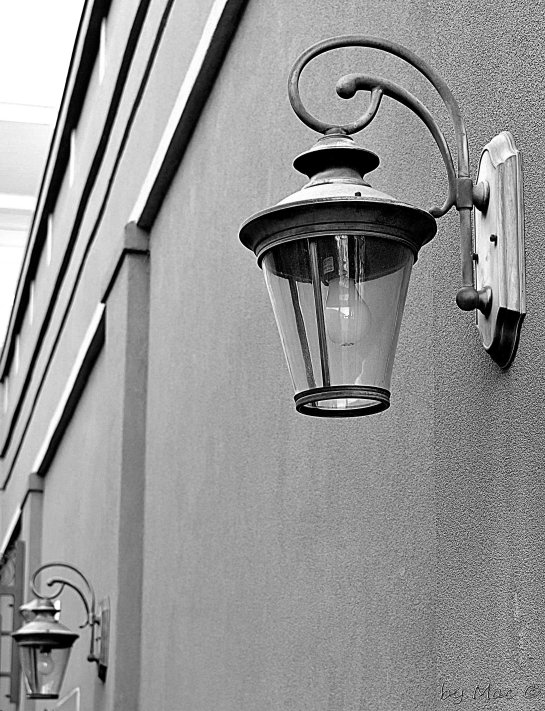 I was contemplating what a good piece would be for today, and came up empty. Really, like feeling a bit dry, running on low. I feel the need to keep it real here. It is important and also encourages others who struggle, as I do, to do the same. My life and emotions are just zapping me these days. I have a bit going on in the personal baggage department. And, then of course the holidays and all those mixed feelings, as I shared here. Shorter, cooler days and less sun also aid in my depression and insomnia flare ups.

So what do you do when things just get too overwhelming? Or like myself you find you’re running on empty?

Well, I have found that blogging has been a great therapy for me. But, it’s not always a place I can freely flow with every thought. So, finding a creative outlet elsewhere has been key for me too, over the years. Drawing and music are valuable to me. I can sit for hours just putting pencil to paper and playing a collection of eclectic artists. I go from heavy medal and hard rock all the way to piano music. With my creative flow it takes on a personality of its own. I will figure out as I go, as the music moves me. Sometimes it’s interesting what comes out at the end, often quite based on my musical connections.(Be sure to see my drawing below.)

Last, I cannot express how much finding kindred souls has helped! Through blogging I have found many that connect with me on different levels of understanding and empathy. Those that touch base with me daily and extend words of kindness to me. Going perhaps on just a vibe from an emotional piece I’ve written. These I cannot treasure enough. It is salve to the soul to have these connections.

Empathy is a beautiful and refreshing quality, but can also be abused by others. As an empath, I find myself at times drained. The world likes to siphon strength from me, down to my heart and soul, until nothing but my shell remains. The arts, writing, music and blogging- these are the fuel that I must use to refill and empower myself. It does take time and effort, but I do know that this too shall pass.

I cannot emphasize enough how much it means to me when you leave a comment, even just a “hello” brightens my day. So, thank you!

©Every Rose by SBDMB (MM)

Filed under Depression, My Art

©Self Portrait by SBDMB (MM)

Self portrait, self loathing and self aware
Am I just an echo of my former self?

©Those Eye Though by SBDMB (MM)

Fallen from Heaven, Son of the night
Lonely without you, Please hold me tight

Feeling each breath, Lips touch my skin,
Starting a fire, Breathing me in

I burned like an ember, Then I’m tossed free
Now scorched and spent, Vigorously used me

I’m part of your habit, You can’t keep away
Again I will suffer, While you make me stay

Under your foot, Crushed by the pain
When you release me, I’m never the same

I’m toxic and ugly, Yet still you do taste
Why do you keep me? My body does waste

Our cycle continues, Singed by hot poker
I’m locked into love, By a chain smoker

©These Chains by SBDMB (MM)

Filed under Love of..., My Art, poetry

Able to cut down, Tear away your voice
With force I mold, Take away your choice

My look can carry, The power to take
My hand controls, A weapon to break

Swift and violent, Gentle and meek
A show of love, But never weak

I may draw blood, With every word
Don’t you know? My pen’s a sword

You may destroy me, Yet it’s in vain
Don’t be fooled, I’ll still remain

With bitter echos, Or triumphant song
A heartfelt desire, Or warrior throng

From limb to limb, You may sever
But I am strong, I will endeavor

I have such faith, In every word
Don’t you know? Pen beats sword!

“Why fit in, when you were born to stand out?” ~Dr Seuss

I finally did “it”! I finally went and got the tattoo that I have been working on creating for quite a few years. Something most people don’t know, well in the blogger’sphere’ is that I have tattoos. The idea is quite unusual to some, while others have embraced thee idea completely.

I was the first in my very conservative family to have one done. My first, just a couple of years ago, followed a year later by my second. Both, quite small and with meaning. As a woman in my mid 3o’s I am not one to just go about getting them done randomly, for looks alone. I have to have true meaning and much thought behind something that will remain with me for the rest of my life.Think of it as a piece of jewelry or clothing you have to look at forever.

So, this design has been in the works for years. It is representative of my Grandmother or as I alone called her “Gram.” She was my best friend. I lost her about five years ago after a lengthy battle with illness. I lived near to her my entire adulthood and she taught me much about life and lessons in my later years.

Gram was an avid collector of giraffes. At the time of her passing she easily had a few hundred. I still cannot see one without thinking of her, even tearing up at times. She also loved purple. She was adorned in a purple scarf even in death. I often bought her purple flowers, she especially loved carnations. But, in the spring we would also collect violets from her front yard.

So, in honor of my Gram these ideas were stirred. And, together with the tattoo artist we came up with this piece in her honor. I believe she would have loved [it] very much. I was SO pleased with how it turned out. This being my first more complicated and detailed tattoo, I was nervous. However, when I saw it, I couldn’t have been happier!

So, as the tattoo artist described it- Here is my “Wallpapered Giraffe Angel” for my Gram.

“Don’t worry if people think you’re crazy. You are crazy. You have that kind of intoxicating insanity that lets other people dream outside of the lines and become who they’re destined to be.”~Jennifer Elisabeth

I hope you take time to color outside the lines in life. We all have creativity within us just waiting to burst. It is okay to be who you are and not stay inside the box placed around you. I encourage you to think about life in a different perspective today, one that is not made up of perfection, but rather one that is pliable. And then, work towards those dreams you’ve set as goals. Truly, “Life is the art of drawing without an eraser.”~John Gardner, go make something beautiful! 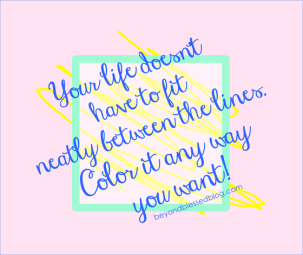 Hey, so this is a complete ploy to get you to check out my online store. I get to use a touch of my creativity to design tops, bags, hats, cup’ware’ and more. For women, men and kids. Come check it!

Find your Halloween, humorous political tees & more! Gift ideas gallor…
(I carry tons of beach, coffee and wine themes too.)
SALE on basic tees for $12 going on NOW! Any design can be added to your tee of choice.
Southern By Design @ Customized Girl
Just some of the designs you’ll find!

This Color Is Called Life

“Paradoxically though it may seem, it is none the less true that life imitates art far more than art imitates life.” ~Oscar Wilde

“Through a painting we can see the whole world.”~ Hans Hofmann

I have always encourage creativity in my kids. I believe thee imagination that resides within a child is a precious commodity, squandered when it is not cared for properly. The glasses of innocence that a child sees the world and life through, then transposes it onto paper or into clay, can be an amazing image to behold.

It saddens me that from a young age kids are required to sit at a desk and spend their days there. They are not given opportunity to strengthen their imaginations but told to hold them back and stay in the lines. Fine Arts are often the first things to be cut back when finances are tight and so, we have kids that will only see life in black and white.

“Life is a blank canvas, and you need to throw all the paint on it you can.” ~Danny Kaye

I thought I’d share a couple paintings I did a few years back. I definitely don’t give enough time to my art, life certainly gets in the way of taking the time out that I should. 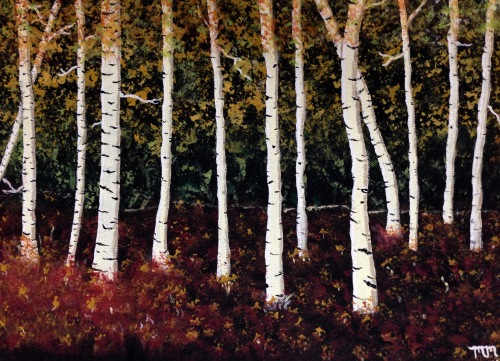