“I will never compromise truth for the sake of getting along with people who can only get along when we agree.” ~D.R. Silva

One of my biggest pet peeves is when people say, “Let’s agree to disagree!”  Well, I have a very outspoken personality and I do enjoy a good debate. However, having a discussion where our points of view clash then say [this], my feeling, it’s a cop-out. But, where did this feeling come from? One that you can’t respect someone and even like them, all whilst having a different opinion?

Have you noticed that it is becoming harder to have a point of view that differs from the “main stream”? Lots of words thrown around these days, such as intolerant, racist, controversial and close minded. Specially if you are in the minority of those that is willing to speak out against the media or leftist views. Name slinging at the outspoken is popular, while being knowledgeable and a thinker, is discouraged.

People need to get educated, not just go with the flow of the main stream! Our society is turning into spineless robots. Taking what the government feeds them. And why not? The government is willing to take care of us. They will offer to pay for everything, in return we only must give up our rights and freedoms. Choosing to be willfully ignorant, should not be a choice!

The media makes concessions on truths as long as it gets the viewers. Picking and choosing what topics will bring the most outrage. No longer do we have media that is uncompromised by opinion, there is a spin to every news outlet. So, if you have not learned to think on your own, to devise your own thought procees, you are left to believe what you are being spoon fed. Of course, “It must be true, it’s on the interntet!” Oh boy (hand to forehead)!

And finally, I struggle with some of those in thee upcoming generation. Those that are self-centered and feel they are owed everything. Where did this entitled outlook on life come from? Those that are choosing to agree with everything the government and media say. “Once upon a time, in a land called America, people truly believed in a capitalist system. Citizens worked hard their entire lives to feed into their 401-K plans and expected that depending on how the economy went, they may profit from their work. They did not depend on the American government to take care of everything for them; in fact they had a great sense of personal responsibility…” I recommend reading the full article, “You Owe Me: Examining a Generation of Entitlement”

And so I leave you with this…

Controversy Thy Name Is Media ~ How Drama Ignites The Masses

“The effect of the mass media is not to elicit belief but to maintain the apparatus of addiction.” -Christopher Lasch 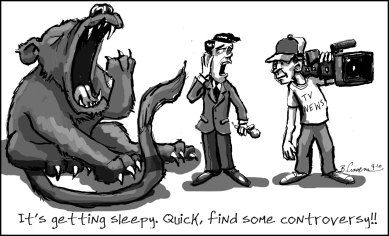 I think you would have to be on a desert island somewhere to be ignorant to all the drama that is taking place in the world of politics at the moment. I am not going to get into playing sides, honestly that is not my point. However, I do not care for either candidate if I were to be honest. Politicians have never been the most honest or dependable people. No, my grievance is with the controversy and drama of the media and the frenzy that they create! The power which they weld and abuse.

“The media’s the most powerful entity on earth. They have the power to make the innocent guilty and to make the guilty innocent, and that’s power. Because they control the minds of the masses.” -Malcolm X

The term media draws its name from the word medium, which means to transfer the information from one end to the other. The media has a profound responsibility to the public to keep us informed. It carries the weight of choosing between honesty, fairness, accuracy, and the possibility of destroying or creating human values. We must hold the media accountable as [it] holds great influential power on politics itself and social change. If the past shows us anything it is that the media has been successful in shaping the opinion of the public in many controversial political matters. 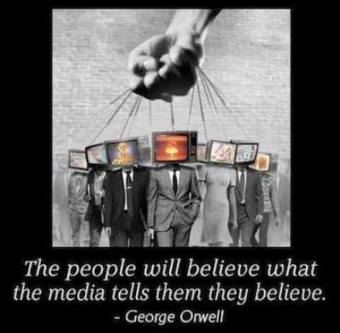 I believe the media of today has found that sensationalized news is a huge money-maker. In a day and age where we are surrounded by media outlets [it] is the voice in our heads. “In the past fifty years the media’s influence has grown exponentially with the advance of technology, first there was the telegraph, then the radio, the newspaper, magazines, television and now the internet (Voakes, 2004).” Shouldn’t they be holding those in political offices responsible for their actions? Shouldn’t they be thee eyes and ears for us, the individual? Yet, instead they have found that drama ignites society into more controversy which equals more “news.” It is a terrible, manipulative, unending cycle! Giving out facts and details to the public which are not true, or even worse, manufacturing them. I know, media is in the business of selling, but where do we draw the line?

I encourage you to draw your own conclusions. To think for yourself and be cautious of whom you draw your information and knowledge from. It is a dangerous world we live in. Not because there is any more debauchery then there was in the past, but because the mass media uses [it] to feed the frenzy of those circling in the waters, waiting to eat it up!