Life In The Fast Lane

“It is only when we feel deprived that we resent giving to others. Self-care does not mean you stop caring about others; it just means you start caring more about you. Start thinking about yourself more and others less. Since you have a choice between taking care of someone else, or giving to yourself, try choosing yourself sometimes.”  ~Beverly Engel, The Right to Innocence

The world is giving us lots of imput, and constantly things are coming at us, all while we are being faced with choices. There are times I feel my mind slipping, getting caught up in these things that are really unimportant and of no consequence. Control of my depression and anxiety will start to fail. Then I begin to feel that I am no good to anyone and a fog settles into my mind. I’m in the fast lane but I’m about to cause an accident because my vehicle’s ‘check engine’ light is on.

More and more I realize how important it is for me to take time to pause. I need to renew self so that I can get through life as a mom, wife and person. I have to make this time a necessity and not just a luxury. Call it a mental health day or call it ‘me’ time, but it is what keeps me sane.

What types of activities do I do with this time? Well, everyone’s idea of what is enjoyable differs. But, some activities, no mater the person, can be quite theraputic. I have found art, journaling, meditation and yoga are useful for everyone. There is much scientific research that backs this up. I can attest that these are all amazing ways to bring my mind back into focus, clarity and at peace.

As for other options I choose to do with my free time– I enjoy hanging out at Starbucks or walking around my favorite store, going to the library, strolling on the beach and doing photography. These pastimes are inexpensive or free, but do so much to help me feel refreshed and get my motor running properly. So, I hope that you will be sure to take moments to relax and renew yourself too, remembering to slow down once in a while before you crash and burn.

Hey everyone! So, I’ve been taking a bit of a break from daily blogging, as some may have noticed. Don’t worry, I’ll be back in full swing soon!

In other news, I’ve FINALLY signed up for SnapChat! I know, I know it’s a surprise it took me so long. For someone who takes so many selfies and photos you’d think I’d have gotten on board sooner. Well, I’m giving it a try, as so many friends use it. Look for me at MacInBlonde, and add me if you’d like. But, for the record, I’m not sure I know what I’m doing yet!

Finally, I am looking for some topic ideas for my blog. Leave me a comment if you have one to share.

Keep the coffee hot and ready, I’ll be back soon! Love, Mac

Thanks For The Memories

Began the journey here this year
Writing out life summaries
Yes, even some mushy poetry, so…
Thanks for the memories!

©Thanks For The Memories ~MM

It’s been lots of fun getting started on WP this year. It has proven to be one of the best things about 2016 for me. I’ve learned a lot about who I am through the therapy of writing. I’ve expanded on my passions of photography and art, as well as learning that I love poetry. I have made connections and learned so much through the amazing talents of other bloggers. I am hopeful and eager to see what 2017 will bring with it. Life is a journey we are all on together. I’m glad I’m on it with you my friends. Have a Happy New Year! Love, Mac xo

Happy “International Talk Like A Pirate Day“! In honor of today I’m going to give a little info, a few tips and share some photos I’ve taken. Let’s have some fun and get your kids involved or just the child in you. 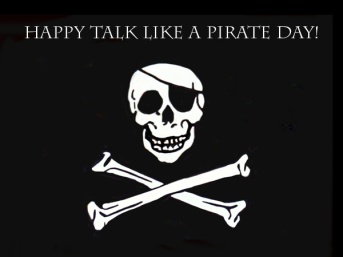 First, where does this day to don an eye patch, carry a parrot, walking with a peg leg, buccaneering and the use of words like “Arg” and “Shiver me timbers” come from?

Well, according to TimeAndDate.com– “International Talk Like A Pirate Day is a parody holiday annually held on September 19. Celebrated for the first time in 1995, the fun holiday encourages people to talk and dress like the sea plunderers of yesteryears.

John Baur (“Ol’ Chumbucket”) and Mark Summers (“Cap’n Slappy”) created this holiday on June 6, 1995. Out of respect for World War II’s D-Day, Baur and Summers chose to move the date of the holiday to September 19.

International Talk Like A Pirate Day was a low-key event until 2002 when it received media attention via syndicated humor columnist Dave Barry. Today, it is celebrated around the world as a way to raise funds for charity organizations, such as Childhood Cancer Support and Marie Curie Cancer Care.”

Second, are a few tips on how to put on your best pirate speach, “Me harties!” Some pirate lingo from Chiff.com suggests:

Third, if you want to get in on some freebies and specials going on around your town. The Times has some recommendations for you.  “Businesses are using the holiday as an excuse for promotions. Long John Silver’s is giving away free whitefish if you just say “Arrr!”, and Krispy Kremewill dole out a donut to anyone yakking like a scoundrel on the high seas. Radio station DJs have promised to broadcast in pirate-ese. And Mango, a company that produces language-learning software, has put together an elaborate tutorial to help you “parley” in “perfect Pirate” for the occasion. You can even find out your pirate name using this pirate name generator. All of which raises the question of what, exactly, it means to talk like a pirate.”

Personally I think getting in on the Krispy Kreme freeby sounds like fun!

Lastly, a few photos I took recently near me. They do this great pirate ride for kids or kids-at-heart, near Myrtle Beach in Murrell’s Inlet. Also, if you’d like to reach another piece about pirates, I wrote this one earlier this month. “Shock and Aarrr!” 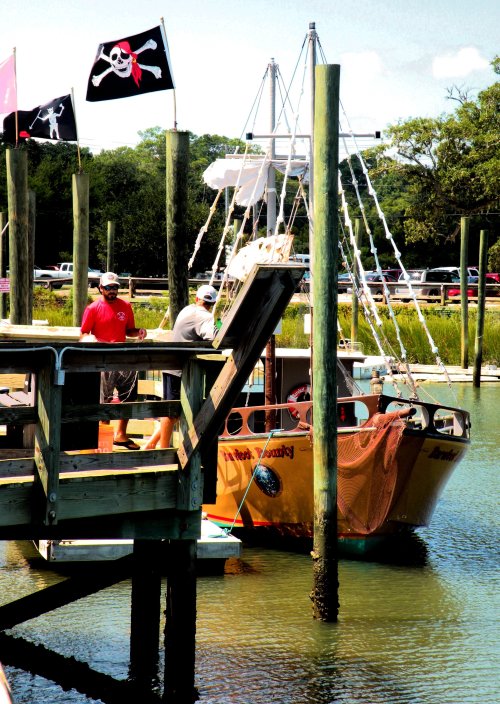 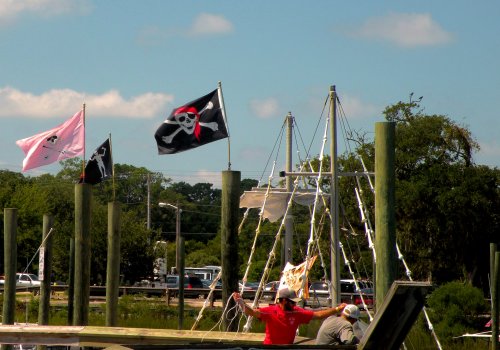